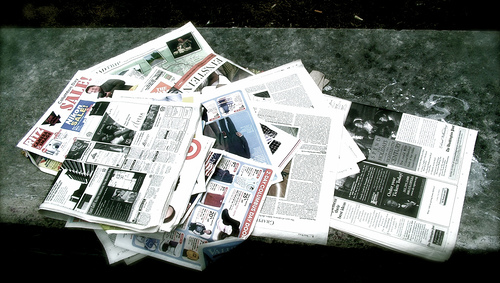 The Washington Post is putting out great quality content in High Def (720p) delivered as a video podcast. In other words a video podcast thats actually watchable on an Apple TV. iTunes/Apple TV pulls down HD content from the web and you watch it on your huge flatscreen TV…

Ever find it annoying that iTunes stops playing after playing one podcast? What if you want to listen to Hype Machine or some other podcast with a bunch of short clips one after the other? Heres my solution:

Just create a smart playlist of podcasts like this:

The most awesome folks at

and Lean Back Vids put together a list statistics for Video Blog RSS feeds using the Feedburner Awareness API.  The below statistics basically show you how many people are watching a given video blogger’s feed over the last 6 months.  I’m not a video blogger per se so I’m stoked that I’m even on the list.  I had no idea that many people we’re watching my feed.  More juicy nerdiness over at VlogMap.  These stats are limited to people who have Feedburner Awareness API thing enabled.

This screencast from Rocketboom does a good job of explaining how to watch video blogs in iTunes. Direct link (~16 MB .mov) I did a really hack version of this about a week ago so I’m glad he did a better version. Looks like other people are getting into it as well…

Thanks for making a better screencast Andrew!

Doesn’t it seem like text posts seem so quaint these days? It’s been a while since I did a regular old fashioned blog post so here’s some stream of consciousness for those of you who care. I was just thinking about how this site has changed over time. My presence online has gone from “my personal internet web page” to a full blown syndicated multimedia stream. In the beginning my brother and I made some web pages that only exist now as digital archeology in the waybackmachine. My sites we’re so crappy but I learned quite a bit from it. I can still remember my brother showing me FTP before most people had even heard of this new thing called “electronic mail”. Websites we’re hard to make and pretty boring for me so I stopped making them. My brother started his career as a web designer and this launched him into other things. But he has also since started blogging again.

I eventually got back into making websites when my friend Bill showed me Blogger in September of 99. I made some sites which have also long since expired and completely disappeared. Then finally I decided I was going to have a blog for good. So I made thelastminute.blogspot.com with blogger because it was finally easy to maintain a site over time. At this point the blog has evolved (or de-evolved) from political link sharing, to anti bush whateverness, to personal journaling, to even more link sharing, to videoblog / video filtering. The current phase of (d)evolution of this site is syndicated me. The content has been ripped mixed and burned away from the format/design of the site and injected into one stream. With one feed you can passively/automagically obtain all the the text posts I’ve created, any video blogs I’ve made or linked to, any music I’ve linked to, and any photographs I’ve taken. All of that from one feed!

If you don’t understand any of that just think of this. My feed is like a picture frame. You go and put that frame on your wall (subscribe to my feed) and the content of that picture frame changes from my words, to my pictures, to my music, to my video, whenever I update it. You don’t have to do anything other than put the frame on your wall. You can also paint on this frame or write your own words in response to whatever it is that I’ve put there. Tell that to Guttenberg!

But you don’t care about any of that stuff… You want videos, podcasts, and interesting stuff to read while you pretend to be work. So put my feed into your aggregator, whether its Bloglines, Fireant, iTunes or whatever. Plug it in, lean back/forward and enjoy the juicy media that comes out the feed.

Totally unrelated: I woke up this morning at 4AM and went down to the local wifi watering hole. It’s a strange crowd up and about at this time of night. It’s like the core finance dudes getting up for the market on the east coast and homeless people being woken by the sun and the Jaguars. I like to think successful people get up early.

Nerds: (me) Want to know how to plug an RSS 2.0 feed with enclosures (videoblog) into iTunes and watch them there?  FireAnt is the best video aggregator and it’s far more useful than this but I still think it’s cool that you can even do this…  Pete from Tinkernet figured this out and wrote the following:

In iTunes 4.9 go under the ‘Advanced’ menu to ‘Subscribe to podcast…’ and paste in the URL of your feed.  It’ll do it’s iTunes magic and show you the feed, and start to download the most recent item and display the rest of the items.  Under the ‘Edit’ menu make sure you select ‘Show Artwork’ to display the part of iTunes that usually shows cover art.  In the little row of buttons on the bottom left of the iTunes window, the last one on the right will show the video playing in full-screen mode.

I hope that makes sense… (Anyone wanna do a screencast of this?)

UPDATE:  I made a really crappy screencast of this. (300 k file)  I compressed it down way too much but it does the trick…

Podcasting just got so much easier. I played around with it last night and it’s pretty sweet. I like how you can listen to all the podcasts right on the site no plugins or anything…