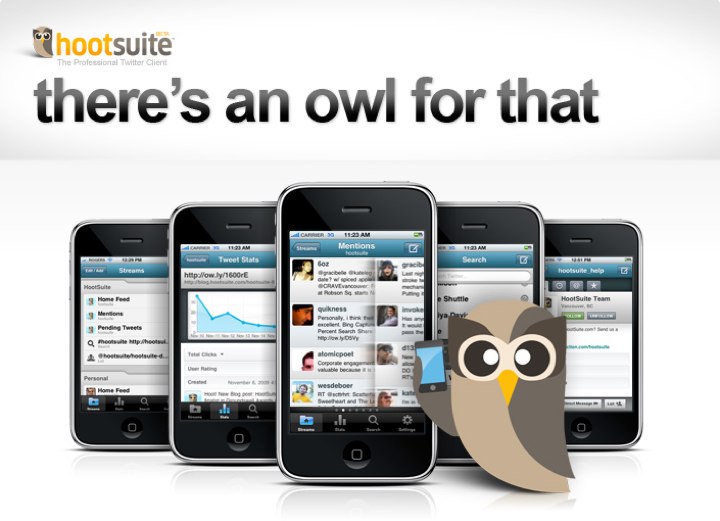 Hootsuite.com is to Twitter what Gmail is to email. It’s like a swiss army knife for twitter. So if you haven’t tried it yet I highly recommend it. It’s my favorite twitter client and it’s web based. You get all the benefits of the cloud and none of the BS that comes from traditional desktop software. IE software updates syncing between multiple computers etc etc…

The new Hootstuite iPhone App includes all of that functionality. The app is snappy, easy to use, and slick. It allows you to go between you mentions, DMs, etc with the swipe of the finger. Just like paging through your apps. It also has infinite scrolling ala Google Reader. I’ve been using the product for a few weeks as Ryan Holmes aka @invoker gave it to me to check out. You can get the app starting December 10th, 2009.

Conclusion:
IMHO the Hootsuite iPhone app is the best twitter client for the iPhone. 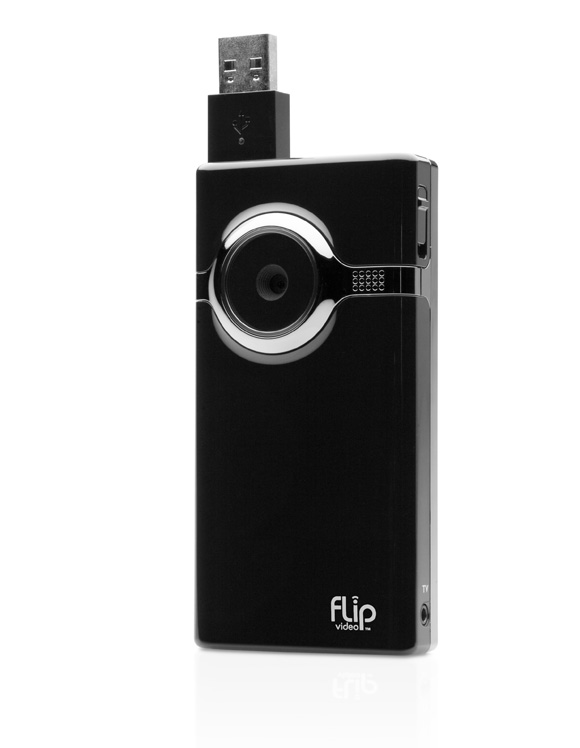 I’ve stopped holding out for the perfect video camera and purchased a Flip Mino HD camcorder. At some point I decided it was better to have low fi videos of my life than to have none. Full res 1080p videos that don’t exist aren’t very fun… So here’s a couple quick thoughts on the Flip Mino HD:

Shooting Video with the Flip:
The mino is very easy to use. All you have to do is push the giant red button and you’re shooting video. There are no settings and that is an awesome feature. You can toss it in your pocket and go because it’s super light small. It’s so easy to use that I’ve started using it to send that you videos instead of thank you notes… It’s perfect for little off the cuff youtube style videos.

Quality:
The quality is crap. Get over it and have fun with it instead. For those who want to know the lack of image stabilizer really hurts the the quality of the video on playback. If you need to shoot some quick video and put it online quickly this is the best solution for you. If you need super high quality video that will be viewed on large screens get something else.

FlipShare Software:
The software installs right off the device itself. No install disk bullshit, no drivers, none of that crap. It’s a huge plus to be able to get going quickly.

Conclusion:
It’s amazingly rare to find a piece of technology (excluding Apple products) that has good hardware-software integration or whatever that’s called. 99% of the time the device kicks ass and the software is complete shit. In this instance both the device and the software do exactly what they should and nothing more. What’s even more rare is something simple and fun to use with no feature bloat, yet. 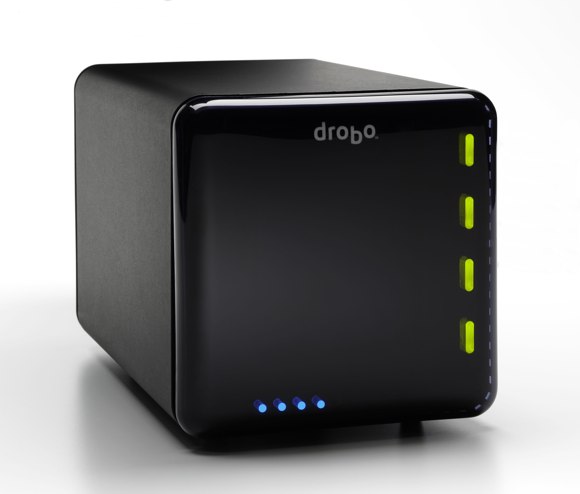 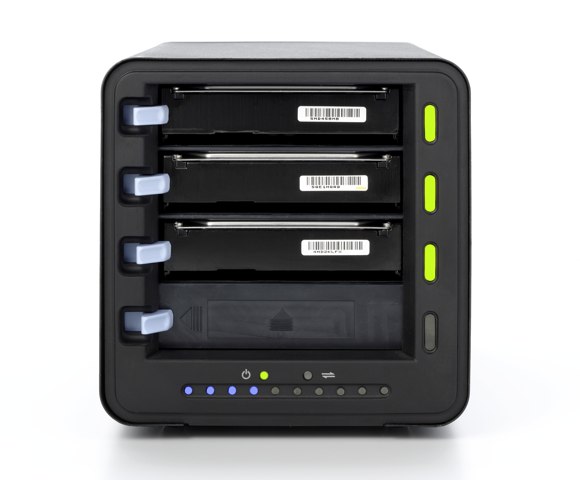 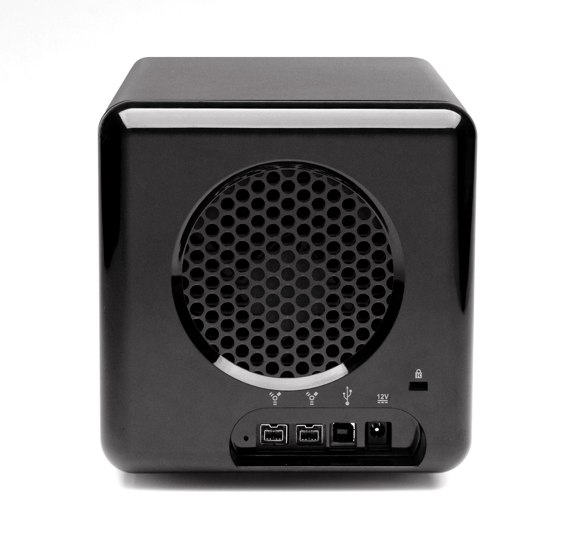 I’ve had a second gen Drobo for about a month and I thought I’d share my thoughts on the device. I put in four two Terabyte drives in it. I run it connected to a 3.06 GHZ 24 inch iMac with 4GB of ram on Mac OSX 10.5.7 using Firewire 800. I haven’t dumped all of my media onto it yet but I’ve played around with it enough to know whats up.

What is a Drobo?
According to Wikipedia:

“Drobo is a data storage peripheral which interfaces up to four 3.5″ SATA hard drives with a computer via High-Speed USB 2.0 or FireWire 800 (2nd generation only). It is primarily designed to allow installation and removal of storage devices without requiring manual data migration, and also for increasing storage capacity of the unit without downtime.”

Who should buy one?
Anyone who creates lots of media and is constantly running out of storage. Shooting RAW photos and HD video eats up space like it’s going out of style. Cloud storage services like S3 would be much better for backup, unfortunately consumer ISP bandwidth is so slow its flat out unfeasible for large amounts of data. As an aside I tried to use one of these cloud based services (backblaze) and it told me it was going to take more than a year of non stop uploading to make the initial backup given my So until the day when we all live happily in the cloud local storage is the way to go. With that in mind the most flexible solution is a Drobo. 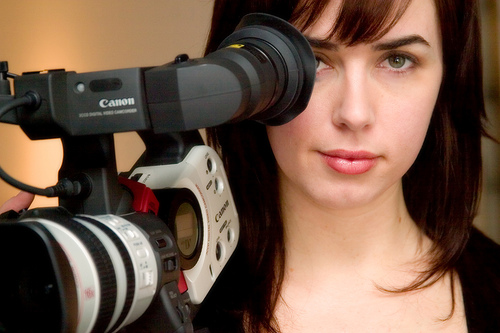 Things you should know:
The actual amount of storage you get is MUCH less than what the drives can store. This is because the system needs a big chunk of space in order to be able to move files around and secure the data. See ‘used for protection’ below: 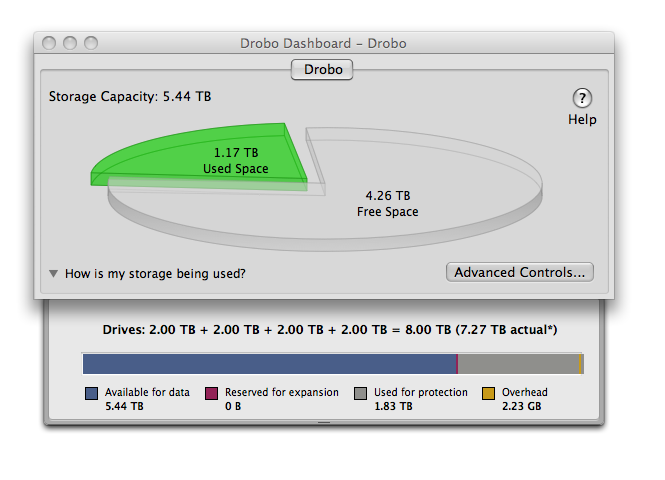 The Drobo comes with an app that is relatively unobtrusive. However it runs as a login/startup item by default so you see it every single time you reboot. Luckily you can easily disable it. Here it is: 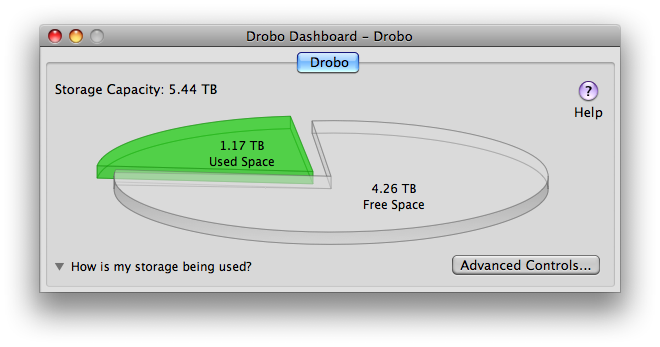 Speaking of booting, this thing actually boots up like a computer. I thought this was bizarre because I’ve never had a peripheral boot up before. Depending on the size of your drives it can take quite some time to boot up.

Here is a screenshot of the dashboard ‘advanced’ control panel when it’s healthy: 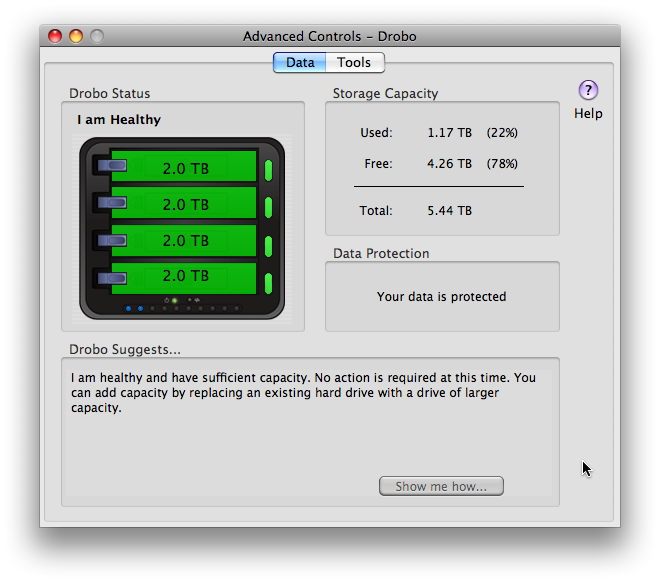 If you see anything other than green here you’ve got problems and you’ll need to do something about it. If you see red one of your drives is probably failing. My brother Jon Rawlinson got one and had a drive failure within a few days of owning it. Not sure if he lost data or not. Jon?

Something else you should know is that the Drobo will completely erase the drives you put into it when you first start using it. So you’ll have to migrate the contents of any drive you want to use before you insert the drive into the Drobo. On that note bear in mind that it only accepts SATA drives. So if your first thought was use that stack of old IDE hard drives on the shelf you’re SOL. Someone needs to make a Drobo like device for those old drives lying around.

Conclusion:
It’s a great device and has certainly given me peace of mind. The Drobo is far from perfect but I would recommend to anyone who needs a big chunk of storage.

[Drobo on Amazon | Photo by blhphotography]