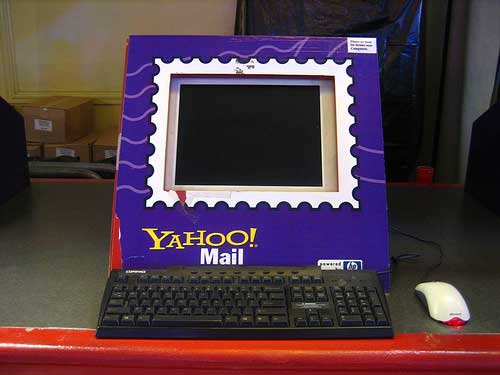 Yahoo has “taken note of Amazon moves and are strategically leveraging their massive infrastructure to provide Yahoo mail users with unlimited storage. But it gets better, rumors have it they are opening the Yahoo Mail api to developers.

This is big. A much smarter way to compete with Microsoft and Google by letting their community innovate on their behalf all the while providing the community with tools that further entrenches their user base.” [full post]

Brian is totally right, this is BIG!

“Weâ€™re psyched to be breaking new ground in the digital storage frontier by giving our users the freedom to never worry about deleting old messages again. And, like any responsible webmail service, we have anti-abuse limits in place to protect our users. BTW: As much as weâ€™d like to just flip a switch and â€œunlimitâ€ everyone on the same day, weâ€™ll be rolling this out over a few months to facilitate a smooth transition â€” we know thereâ€™s virtually nothing more precious than your inbox.

We hope weâ€™re setting a precedent for the future. Someday, can you imagine a hard drive that you can never fill? Never having to empty your photo card on your camera to get space back? Enough storage to fit the worldâ€™s music, and then some, on your iPod? Sounds like a future without limits. ” [full post]

Flickr is forcing us ‘old skool’ members to use Yahoo! accounts to login to Flickr and we’re NOT HAPPY.

I recently merged my old skool account with an old Yahoo account of mine in order to be able to use the ‘mobile site’. I eventually had to get a Flickr staff member to UN-MERGE the accounts because it was so incredibly annoying to use the merged account. Not only was it yet another login/password to remember but it was flat out cumbersome to use.

One of the main issues was that I had to constantly re-login over and over on my home computer to get to my photos on Flickr.

Also, I was being logged into a Rogers (Canadian ISP) cobranded version of the Yahoo.com site because I had a Rogers account like 2 years ago. The problem with that was the Rogers Yahoo cobranded site never worked properly! So merging the accounts actually made for a worse experience on Yahoo! as well as Flickr. I don’t even use that ISP anymore and yet I have to look at a Rogers logo every time I go to Yahoo!

I’ve been nothing but supportive of Flickr from the early days when they we’re a tiny little company here in Vancouver but this is just a bad idea! So what if it’s a ‘pain’ or tedious to keep two login systems running? The friction this causes all of the original Flickr members should outweigh the ‘pain’ it causes the developers at Yahoo.

If someone asked me what photo sharing site they should use I’d no longer be inclined to just say Flickr.

If by some chance Stewart, Caterina, Heather or any of the Flickr peeps are reading this PLEASE DON’T DO THIS!

If you’re planning to bail here are some ways to get out: